When electronic printed circuit board (PCB) design software company Altium set out a vision to be the dominant player in the market by 2025, with $500 million in revenue and 100,000 subscribers, this time last year, it seemed like a lofty goal.

But only one year on, the vision feels less blue sky and more like a forecast, with analysts and investors alike getting behind chief executive Aram Mirkazemi's ambitious plan. 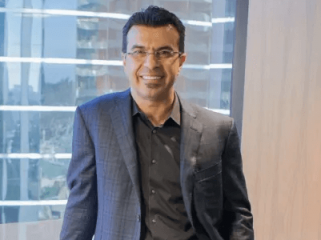 Speaking to The Australian Financial Review Blue Ocean Equities analyst Stuart Turner said investors and analysts needed to think about Altium's big picture, and that's why he had set the highest target price of all analysts on Bloomberg on the stock: $53. The stock closed at $36.17 on Friday.

"Altium is passing all the checkpoints in this result and they're doing everything you could expect them to do to achieve that [goal]," he said.

"I'm confident in the way it's going and the research is very positive on it. This is a team that has been solidly delivering on its promise for a long time."

Mr Turner's comments come despite Altium slightly missing analysts consensus estimates in 2018-19 when it came to revenue and net profit growth, according to Bloomberg.

The company, which makes software for people to design electronic printed circuit boards) grew revenue grew by 23 per cent to $US171.8 million, while net profit jumped 41 per cent to $US52.9 million in the last year. But, on average analysts had predicted the company would generate $US173.8 million in revenue and a net profit of $US53.6 million.

Despite this, Mr Turner said the result required investors to "see the wood through the trees" and the numbers were not a surprise to him, coming in slightly above his own forecasts.

"It wasn't a miss in the sense that the company had indicated a certain level of revenue and earnings and didn't achieve it. On the contrary, it maintained its medium and long term objectives and they're confident in their long-term plans," he said.

Unlike many multi-billion dollar ASX-listed companies, Altium does not provide guidance. Instead, it sets goals a few years in advance and informs the market of its aspirational targets. 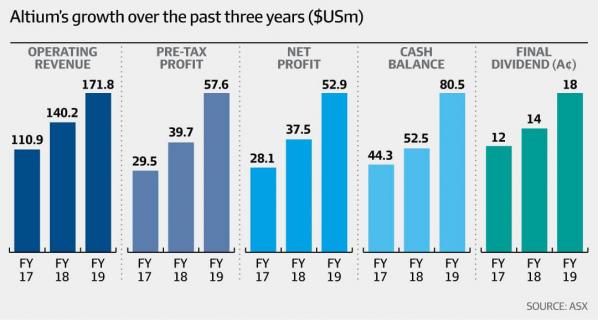 Mr Mirkazemi had already set out a 2020 target of $US200 million in revenue - a figure he was confident the company would not just meet, but exceed. He also said the business was on track to hit 50,000 subscribers by the end of 2020.

Mr Turner said the market had already been expecting that Altium would beat its $US200 million goal, with the question now being by how much it would exceed it.

"When Aram issued the target originally, I didn't think he would issue a stretch target. He'd make it something that put the company on reasonably strong grounds as a base case that it could beat. The question is does it beat by 1 per cent, or 10-20 per cent?" he said.

This view was backed up by another analyst who did not want to be named, who said while it was a "bit bizarre" Altium did not set forecasts, with each target the company sets, the closer its come to it,  to a point where it's almost the same as giving guidance.

"When they come with with the numbers, they're genuinely thinking this is a number they can deliver, but they also want to push the organisation," the analyst said.

"The biggest struggle it's had is the industry they operate in is quite opaque and niche and it's difficult being an Australian-listed PCB designer software company, when the market here understands less than in the US ... so they can sometimes struggle to communicate their market strength and positioning."

Despite Altium's result being slightly below expectations, its share price leapt about 12 per cent in the last week. The company is trading just slightly below its record price of $38.49, achieved in late July.

Analysts on Bloomberg have an average 12-month price target of $39.43 on the company.

Altium's products, including its flagship Altium Designer software, compete with those of large rivals Cadence and Mentor. Historically its software has been positioned as lower-cost and easier to use than those of its competitors, but also less suited to complex projects, but in the last few years this has been shifting.

Altium has released products aimed at the higher end of the market, while simultaneously also developing its Altium 365 cloud product, which is its first online design software solution and a core part of its future vision of connecting PCB design to the manufacturing floor. Altium 365 is set to be released in November.

It also operates a business called Octopart, which is an electronic parts search tool.

In 2016, Altium formed a major partnership with Dassault Systemes SolidWorks to deliver a specialised version of its PCB design software for SolidWorks users. This was a significant deal for the business and UBS analyst Josh Kannourakis said in a note an extension of the relationship with Dassault could lead to medium-term growth for the business, which has not been factored into his models or the company's expectations to date.

"Altium's development of ECAD (electronic computer-aided design) capabilities within Dassault's Catia 3D Experience platform is of strategic importance to Dassault, in our view," he said. "We believe this has the potential to be material medium-term."

Mr Kannourakis also believed there was potential for Altium to establish partnerships with manufacturing companies in China - a region which still has significant growth opportunities for the company.

"Relationships with meaningful manufacturing partners utilising Altium 365 are a key requirement to enable ALU's long-term strategy. We see potential for announcements of these relationships, especially in regions such as China where Altium Designer is widely used, to be a key signpost for progression of Altium's 'transformational' strategy."

We also use analytics & advertising services. To opt-out click for more information.